We began the lesson by doing the chromatic scale warm-up. I noticed that Anna’s left hand had less power when playing these than the right hand had. We did some work on playing the warm up while curing the pinky finger and keeping the wrist up.

Anna had some questions about the minor scale, so we briefly talked about how it is structured and the different types of minor scales.

We then took a look at Storm at Midnight. The first two lines sound really nice and solid! I suggested that Anna begin by playing the 3rd line when she starts practicing the song each day, since it’s less comfortable for her to play. We also did some work on playing the transitions from one line to another. I then heard Anna play Chromatic Scale Etude. Anna isn’t comfortable playing it hands together yet, but she played really strongly hands separately. Her rhythm was nice and consistent!

Anna should continue to do the Chromatic Scale Warm-Ups at the start of each practice session. She should focus on the left hand especially, making sure to play with strong fingers and keeping her fingers curved and wrist up!

Storm at Midnight: Anna should play the 3rd line first before she plays more familiar material. She should make sure to hold the notes for the appropriate amount of beats (not longer or shorter). To transition between one line to another, she can practice the last bar of the line, then land on the first note of the first line. Once she masters this, she can try to play the last bar of the 2nd line and the 1st bar of the 3rd line, and gradually add more bars.

Chromatic Scale Etude: Anna should work on playing lines 1 and 2 hands together and keep her 8th notes nice and consistent (same amount of weight and sound for each note).

She should try to practice for 20 minutes every day!

We began the lesson by reviewing the songs from last week “Snowy White” and the quarter rest songs. Megane did really well with this! I suggested that Megane have both her hands ready to play on the keyboard, even when one isn’t playing. This cuts down the time it takes to place the other hand on the right spot in the keyboard and the play. It will make things a lot easier!

We learned about the half rest: a symbol that means to be silent for two beats. It looks like this: 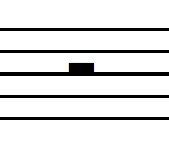 We clapped the rhythms of the songs using this rest. We also reviewed the note names in the new songs before playing them. Megane found this very helpful, and she had less trouble reading the notes when she’d already read them before. We spent the last five minutes doing ear training using The Scientist.

Megane can review the songs Rocking Chair and Bumpy Streets. She should review all the notes before she plays and try to keep both hands on the keyboard at all times! If she wants to she can look ahead at the next songs in the book. She should practice for 5 minutes every day!

We began the lesson by reviewing last week’s assignment. Nelly had some trouble naming some of the notes in the Twinkle Twinkle Variation 2, so we reviewed the notes and how to play the song. We also clapped the rhythm in the song to make sure that she wouldn’t speed up during half notes and whole notes. I noticed that Nelly has a tendency to restart a song as soon as she makes a mistake. I spent some time showing her how to practice the specific parts that cause her problems. I suggested she begin at the part where she makes the mistake, and then work on correcting it by going over it really slowly and reviewing all the note names. Once it feels better, she can try to play a couple bars leading up to it. After doing this several times, she can try to play the whole song! I suggested as a challenge that she could try to play all Twinkle Twinkle songs one after the other without any mistakes.

In addition to reviewing Twinkle Twinkle we also did some clapping exercises (I clapped the rhythm and asked Nelly to clap it back).

I suggest Nelly review Twinkle Twinkle Variation 2 over the March break. She can also begin to play the review songs in the new book (Book C). In addition to this, she could begin to work on learning a song by ear. This is when you listen to a pop song or movie theme and try to figure out the notes based on what you hear! It’s a great way to improve musical skills and is also very fun for young students. No matter what, she should be playing piano for five minutes every day, even if it isn’t material from her book.

We began the lesson by reviewing some concepts from her book, such as short sounds, long sounds, black key groups, and the hand position. We then looked at Twinkle Twinkle. Zoe is still a bit hesitant to play the song by herself, but she was very enthusiastic when I played the song. She guided my hand to the right spots on the keyboard! I encouraged her to try and play the song with me, but she wasn’t very keen on it. Maybe next time! We looked ahead at the page about the wrist, forearm, and fingertips and I demonstrated the correct hand position, and how to take the “eyeglasses” hand shape we’d done in previous weeks into the claw-like hand position that’s used to play piano.

We also did some ear training exercises where I played a note while Zoe’s eyes were closed. Zoe then tried to find it on the keyboard. She did really well with this! She got really close to the correct note I was playing, which is amazing to see.

Zoe just needs to continue to become accustomed to sitting at the piano. She should continue to practice the sitting position and then can play whatever she likes for 5 minutes.