Sarah John is a freelance conductor living and working in the Greater Toronto Area. Since September 2014 she has been leading the Church of the Messiah choir.
From 2006-2012 she lead Vespera, an all female vocal ensemble committed to the performance and promotion of contemporary classical music.

Sarah has conducted ensembles ranging from community choirs to college and professional symphony orchestras.  She has conducted at various festivals and workshops including the Conductors Retreat at Medomak, the Symphony Orchestra Academy of the Pacific, the Eastman School of Music Summer Conducting Institutes, conducting workshops with the Kitchener-Waterloo Symphony and Orchestra London, and Festival 500 in St. John’s, Newfoundland.

Sarah studied oboe with Jerry Domer and Paul Emond and voice with Verna MacDonald, Judith Dowling and Susan Young. During her undergraduate degree she focused her studies first on choral conducting with Donald James and Bruce More and then orchestral conducting with George Corwin. She has held positions with the Powell River Academy of Music, Echo Women’s Choir, Scarborough Music Theatre, the Windsor Symphony, the Windsor Symphony Chorus and Heliconian Choir and Orchestra and the Greater Toronto Philharmonic Orchestra.

In 1997 Sarah received a grant from the Canada Council of the Arts for her work as Conductor-in-the-Community with the Windsor Symphony.

Sarah holds a Master’s degree in Performance (Conducting) from the University of Victoria.

Get to know Sarah…

Favourite song: To Keep Me Warm by Emma Louise (current)

Best quote from your teacher: “One performance is worth five rehearsals.”

Favourite quote: “Be the change you want to see in the world”

Best thing about teaching at ABC: The people and the great music making!

Is Sarah Your Teacher?

Heather
Things are going well Heather.  I can hear the progress you are making.  continue to explore the “less important” words and their vowels in each bit of phrase. Ensure that these vowels are pure and feel good to sing.  Then when you speed things up and sing complete phrases you will notice greater ease in singing.  I look forward to what new music you bring to work on next time. cheers!

I like that you are getting more and more about making a really pretty sound my dear.  It’s fun when music is de-mystified isn’t it?  It makes it all a bit more easy to learn.  You are gaining a lot of ground every week.  It’s time to look into some keyboard skills perhaps.  We can talk about it.  cheers!

Isabel
So, working in the upper register can be a bear can’t it!  I know this very well myself.  But note that the energy we put into building the “muscle” of one part of our range will show strength in other parts of our range.  How about we find a very up tempo song to work on to see what can be uncovered in the learning of it!  see you soon!

Nicole
Well done with the song writing process lady!  I think it is very good progress.  but…..you must stop being so hard on yourself.  It’s good to be analytical as long as it is positive. punishing yourself won’t ever benefit you.  Believe me I know!   Listen to Whitney Houston’s – The Greatest Love of All.  This song may be a better fit for you right now.  See if you like it!  see you soon!

Anastasiya
I’m really happy with your progress Anastasiya, especially with how you are getting stronger with your finger movements.  Do lots of repetitions of the chords and arpeggio exercises we did this week. Always make sure your fingers are bent not flat.  Practice reading the first exercise in your Dozen-a-Day book.  Always remember you can count from middle C.  It’s ok to write the names of the notes underneath (at first).  Keep up the good work!

Leonardo
I’m really happy with your progress.  Your hands and fingers are getting stronger and stronger all the time.  Do lots of repetitions of the chords and arpeggio exercises we did this week. Always make sure your fingers are bent not flat. Please practice finding F, F#, D, D# all over the keyboard.  Practice making major chords minor by moving the middle finger down one note.  Please practice Twinkle Twinkle Little Star so you don’t have to look at your fingers when you play it.  Good work!

Eduardo
The Swing piece is sounding really good.  This week erase all of your pencil markings.   Practice the fingerings for the following scales – C and G.  Remember the patter for two octaves ascending is 123, 1234, 123,12345 and descending is the opposite.  For the G scale it is a little different remember?  Keep up the good work. 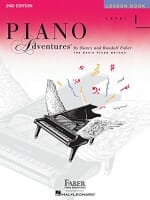 Faber Piano Adventures Level 1 Lesson Book introduces all the notes of the grand staff, elementary chord playing, and the concept of tonic and dominant notes. Students play in varied positions, reinforcing reading skills and recognizing intervals through the 5th. 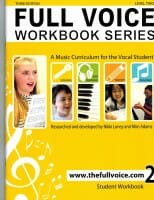 Buy from the Publisher